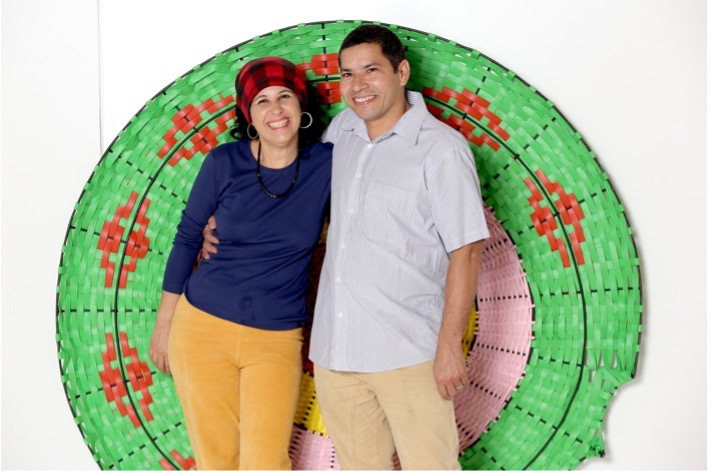 Formed by the artists Tadeu dos Santos Kaingang and Sheilla Souza, in their creations the Kókir Collective present issues related to indigenous cultures and current times. They are both also teachers at the Visual Arts course of the State University of Maringá (UEM) in Paraná (Southern Brazil) and members of the ASSINDI – Maringá Indigenous Association.

From Monday to Friday

Krecidade offers a dialogue with the convergent and temporary. The city with its social structure woven in texture, tapestries and connections that indicate paths and addresses.   Pathways that may bring people closer or elicit disgust, the urban chaos that makes human beings invisible, the growling of motor engines and the screaming sounds of horns. The Kaingang words sinui-beautiful or korég-ugly might come to mind in parallel with the Kaingang presence whenever it might be observed in the city.  People in cars glance at the Kaingang baskets being sold by them at crossings and traffic lights. The red traffic light allows a longer look at the graphic designs on the baskets, before moving on.  In these movements, Krecidade conveys something fleeting and transitory.  For those who were able to see them, the choices of support devices and textures stand out as the scars of a people who have suffered and were silenced. A people that were almost erased from existence by the cities that took shape with the advance of society over their land. City dwellers feel their way blindly in the concrete jungle. We all came from the woods at some moment in our history. Ka is “woods,” Kaingang, people of the woods. This separation between the city and the woods is eventually brought together in Krecidade.